Yes you read that right I am taking on another round with Verizon Wireless and their Ambassador program. Color me giddy, I just love working with this group of people and being able to review, test out, geek out over the new devices is an awesome perk. 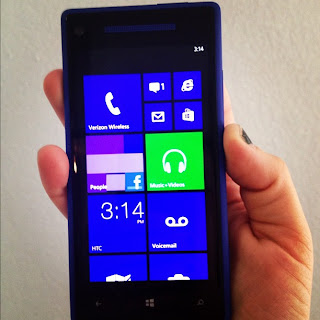 In this round I was sent an HTC Windows 8x phone. I will be up front and honest….I am struggling a little bit with this phone. The phone itself is awesome, I love it and I am not having issues with the phone, it’s the app store. I am not sure if it’s just because it’s a relatively new phone operating system so it’s still making it’s name on the app market or what but as of this moment there are not many apps that are relative to me. Don’t fret because it does have the basics, FaceBook, twitter and of course you can add your email but as far as games and a few other categories go it’s still working on it. Or at least I hope they are.

Even though I am having a bit of a hard time getting used to this being my go to phone I am excited to learn all about this phone over the next three months and test drive this bad boy out while coming here to share my finds, thoughts and of opinions on the Windows phone.

Disclosure: I am participating in the Verizon Wireless Ambassador program & I have been provided with a wireless device & three months of service in exchange for my honest opinions.