June 29, 2010
inUncategorized
• Leave a comment
Just fyi, this is a difficult topic for me. I grew up in a divorced family. And both of my parents were different religions. My mother is Jewish and my sperm donor (“father”) is Christian. Growing up I was forced into going to church, awanas and church camp. I never enjoyed the fact the it wasn’t my decision. Even from a very young age I realized that it was wrong for something of such importance to be forced on someone. Because of that I am not a religious person. I made a promise to myself at a very young age that if and when I had children I would never put them in that situation. And now here I sit at 28 years old, married to a Christian, with three kids and I stand by that promise. Last year my friend invited us to attend Vacation bible school with them. Her daughter is the same age as my oldest. I talked to Jr before giving her an answer. Explaining to him what VBS is and if he would like to go. He jumped at it. Jr has always been a curious little man and he was very excited to start this new experience. It only lasted a week and enjoyed every second of it. Now we are on our second year of attending VBS and I asked my daughter if she wanted to attend this year. As soon as she heard the word school her eyes got big and she gave me a huge smile and said yes. I know she is young (not quite four) but I still explained to her in my best way what VBS was so I could give her the choice of attending or not.
Every night 30 minutes before VBS ends they bring everyone into the main room (not sure of the actual name lol) and they usually put on like a mini play and maybe sing a song or two. They also give out prizes for say someone who brings a friend or the class that raises the most money. They also announce if any child(ren) have accepted Jesus Christ into their hearts. Imagine my surprise when they called Jr up there. This is all very new to me so I was a tad lost but I knew I was proud of him. At six years old he has already decided his path he wants to follow (That’s a heck of a lot more then I did at that age). 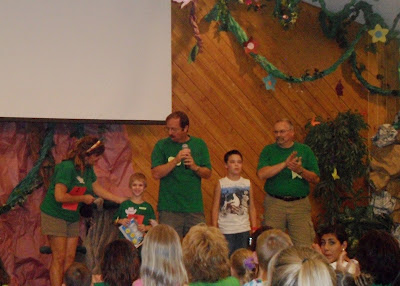 I know the quality is horrible but it’s the best picture I got. Here he is getting recognition for accepting Jesus Christ into his heart.