I have been with my husband for 13 years now and one of the very first things I learned about him was that he is allergic to nuts. I have never been with him when he has had a severe reaction. He did have a reaction to a dish I made a few years back. It was one of those premade dishes and I was unaware it had walnuts in it. How was a I to know a pesto marinara had nuts. Ever since then I have been more careful on premade dishes that I buy. Thankfully he caught it right away and headed to the hospital and got it stopped.

I had always expected at least one of our children to come down with the same allergy and I knew once my daughter was born that it would be her. Since an infant she has had severe eczema and since eczema is very often linked with allergies it was no surprise that when I had her tested at two years of age that she was in fact severely allergic to nuts. I have always played the safe route and didn’t give any of my kids any type of nut until after they were allergy tested. It’s kind of funny that my almost seven year old refuses to eat nuts because he remembers me telling him he might be allergic to them when he was younger. But I go with better safe then sorry so that is fine with me.

While my daughter was at my parents house this weekend she ended up with her first reaction. It was a simple accident that could have happened to anyone. My niece wanted to share with her so she gave her some cashews and Samantha not fully understand that they were nuts ate them. She immediately walked over to my Dad and told him that her throat hurts. My Dad called me and asked if she was allergic, I was like um yes why. He told me what happened, I grabbed the two boys (half dressed) and the benedryl and ran over there.

When I got there she had a little bit of a rash on her chin and throat area. I gave her some bendryl and she seemed ok so I let her play. About five minutes later she threw up. And five minutes after that she threw up two more times. By then she started to get some hives so I grabbed her, told my mom were going to the hospital and I left. I drove like a bat out of hell and when I got there I parked in the red zone and asked if they had epi pens, when they said yes why I told them and we were rushed right back in. She didn’t have many hives but I could see the swelling under her chin area and all she wanted to do was sleep which bothered me. Finally we got sent over to peds and by then she started getting hives on her cheek and arms. They gave her an epi shot and a dose of prednisone. We stayed for about 30 min to make sure she was getting better and then went back to my parents.

About an hour later she just kept getting worse. By this time there were more hives and they started to get very red. So off we went, back to see the Dr. By the time we got there I wanted to cry just looking at my poor baby girl. I can’t imagine the amount of pain she must of have been in. I had given her more benedryl right before we ran out the door the second time so the Dr’s said there was nothing they could do for her since she’s already had that along with the epi shot. Just to keep an eye on her and if she worsens to bring her back. Thank god that finally about an hour and a half after the second dose of benedryl she started to clear up and once it started it was fast and within an hour she was completely cleared of all hives and redness. It was such a relief when it was finally all gone I just can’t express how relieved I was. 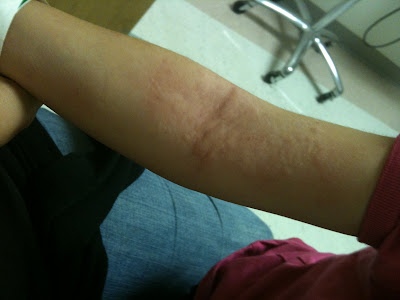 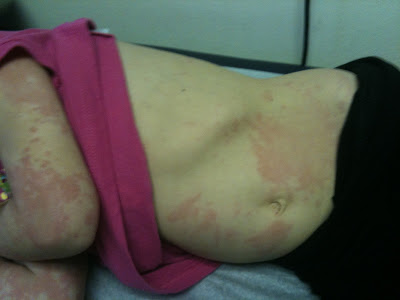 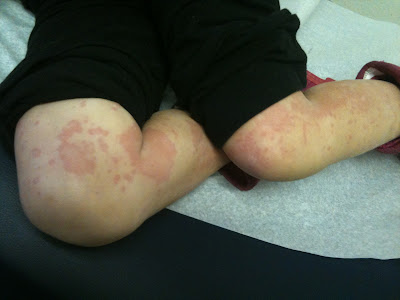 After the day was over I sat down and talked with my husband and he told me from his experience the best way for it to be treated is to go to the ER (not urgent care) and they will give an epi shot followed by a shot of benedryl. The epi stops the initial reaction and the benedryl keeps it under control. So now that we have unfortunately experienced this I am glad I know what to expect and how to handle it.

My poor Dad felt horrible that this happened while he was watching the kids. I told him over and over that accidents happen and really it was only a matter of time that we had to deal with her allergy and that I am just thankful it happened at their house as opposed to at a friends house who might have no idea how to handle allergies or at school. I think the only thing that helped him feel better was getting a big hug from Samantha.