Today I want to talk about how to take screen shot on the HTC Windows 8x phone. It’s one of the first things I learn how to do when I get a new phone and I usually figure it out pretty easily, but it took me up until ohhh five minutes ago to finally do it. I assumed it was like most phones and that you had to press the power button and the start/home screen button. I kept pressing those buttons but I would get one of two results.
1. The phone would go into standby mode
2. It would go into voice recognition mode
Neither of which was what I wanted to do…insert frustration here. I was about to give up on the whole thing but decided to send out a tweet asking if anyone knew how. I figured if the twitter-verse doesn’t know then it’s probably not meant to be. Verizon Wireless support got back to me almost immediately. 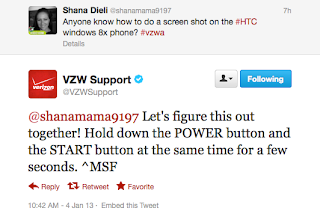 You know the saying that sometimes it just takes another set of eyes for you to see things? Well in this case it rang true. As soon as I tried it after reading Verizons tweet the strangest thing happened…it worked! Don’t you love how that happens? Despite my frustration I am just happy I finally was able to get a screenshot.

So here’s what you do. 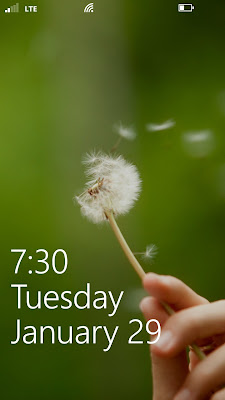 * I am part of the Verizon Wireless Ambassador program. A device was provided to me with three months of service in exchange for my honest opinions about the device. All thought and opinions expressed therein are my own*