How safe are you really

The kids and I were sitting here in the living room, normal day and then I hear a helicopter blaze over us. Seriously this thing was booking it. So of course being the nosy person that I am I peek out the window and guess where the helicopter is??? 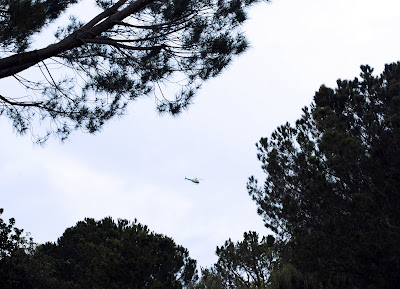 The kids and I were sitting here in the living room, normal day and then I hear a helicopter blaze over us. Seriously this thing was booking it. So of course being the nosy person that I am I peek out the window and guess where the helicopter is???
In the next neighborhood over, about a half a mile away. It’s been circling for over ten minutes. I know we don’t live in the safest area of the world but it still bothers me that there is crime practically in our back yard. This is not the first time I have seen a police helicopter circling over that specific area. There is a huge apartment complex there and it has a reputation on not having the best tenants there. I heard there was a shooting there last year. What makes me really nervous is my sister informed me the other day that in the neighboring city there is a child molester on the run. Again I know the world isn’t perfect and there are horrible people out there but I don’t want them ANYWHERE near my family.
I am a worry wart, sometimes I wish I could take all the people close to me and go live in a perfect little bubble. Kind of like The Stepford Wives minus the robots LOL I just watched that movie so it’s stuck in my head right now. I just hate to think about all the scary things out in the world that eventually my kids will some way or another have to experience. For example; I went to pick Jr up from school a while back and noticed two police cars as I was pulling up. One was leaving but the other was still there. Of course that worried me but no one at the school would talk. The next day we got a letter sent home from the Principal that there was a man talking to some of the students, young girls and tried to get one of them to get in his scary. SCARY!
I guess the whole point to this post is how do you prevent/protect/talk to your kids about this kind of stuff. Jr knows there are bad people who do bad things in this world but that’s about as far as I’ve taken it with him. He knows not to talk to strangers and what to do if he gets lost. I know a lot of this is the worry wart in me but I get the reminders every time I see that helicopter fly by the house.