Good morning everyone and happy Saturday!  I am currently sitting here devouring my fourth cup of coffee, doing work and watching Blue’s Clue’s (yeah I watch cartoons and multitask like a pro, that’s how I roll) with my little man I’m thinking how the sight of me earlier this morning was a little hilarious. Well actually no one knew any better so to everyone else it’s not be funny at all, but here’s the thing, we all do things that we try to pull off as normal but only we know the secret right? And that got me thinking what if I were to spill those secrets, wouldn’t it be funny? Would others join me? And thus Shameless Saturday was born

If I have confused you don’t worry, it’s something I excel at. Heck I even do it to myself sometimes. So I’ll give you an example by spilling my Shameless Saturday. The first of many to come cause let’s face it, I’m not Mary Poppins perfect (despite me telling people I am) and dude sometimes when I haven’t had my coffee my head just isn’t in the game yo. Okay enough rambling, let’s get on with it. Dun dun dun….I give you Shameless Saturday!

At one o’clock a.m. my phone rang. It was my ex. He informed me he forgot a few necessary items at the house and was wondering if I would take our oldest to the airport so he could come spend the weekend with him and bring the things he forgot. Sure, I say no problem. Yeah 4:30 wake up call comes quickly so being half asleep I pack a bag for my oldest, grab the scripts, iPad, toothbrush, gosh I hope I didn’t forget anything. Wake the boys up, get them dressed, brush their teeth, do my makeup, brush my hair, grab a huge cup of coffee and we’re outie! It wasn’t until about the halfway point that I realized dude, your breath stinks. Well that’s odd, I brushed my…oh wait, that’s right. I totally forgot to do that. Brownie point for me! As if that wasn’t cool enough I totally put on the clothes I wore the day before. Even the socks. Yup I did it. Now while everyone who saw me thought I looked awesome and cute for 5am (cause that’s what I told myself) I on the other hand knew dude, you’re rocking yesterdays outfit and your breath is worse then a dragons right now.

Seven hours later I still haven’t brushed my teeth, instead I have made another pot of coffee and changed my clothes and typed this here awesome post to share with the world just how awesome I really am. High five!

I hope you will join in with me in sharing some of your shameless moments and know that we’ve all had them. Be sure to link up, grab a cup of coffee and enjoy in the awesomeness that is life. Now I am off to go brush my teeth.

5 Reasons I Will Not Be Seeing Elysium

Since the first moment I caught wind about this movie it has put me off. Call me judgmental (I prefer opinionated but potato po-tah-toe) but it just bugs me. It’s the same as when you get those gut feelings that something isn’t right or something will go wrong, I have them about movies sometimes. Totally normal people.

Let me count the reasons I will NOT be seeing this movie.

1. At first glance all I can think of is um hello Matrix ripoff much?
Seriously even in this brief three minute video all I see is Matrix references. End of world type scenario, the elite run the world (machines run the world). Alone, one man must save the world.

2. The whole plug, camera, AI, whatever that is in the back of the head?

Okay so maybe it’s the whole Matrix similarities that are bugging me so much about the movie and I should just change this to the one reason I will not be seeing this movie, it is a reason for me, but the biggest similarity that is painfully obvious??? A GIANT plug in the back of someone’s head!

No matter how awesome of an actor he is, he is not a badass…I repeat he.is.not.badass. The being covered in tats while I normally find insanely hot but uh yeah not on him. Don’t get me wrong, I’m not totally hating on Matt because he has that boy next door cuteness to him and he does have some good movies like Dogma, that was an excellent movie, Chasing Amy was another good one, Glory Daze, Oceans 12 I just find the character very out of his realm.

4. Because of reason three I find his whole character a little comical and I just can’t take him or the movie seriously.

I’m sorry to all the hardcore Jody fans but she’s always irked me. I am not a fan of her acting. I know she’s been around for ages (not knocking her age cause that would just be rude, btw she does look fantastic in the trailers) and has gotten many awards and she is beloved by her people, I am just not one of those people.

There you have it folks, my five reasons on why I will not be seeing this movie.

How to start your day off with a bang 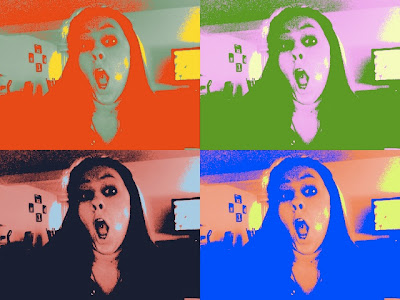 Have you ever had one of those mornings that just starts off with a bang? I’m talking a bam smack you in the face, get the hell out of bed only to end up wishing you never got out of bed kind of morning. Yeah, that kind of morning slapped me in the face today. So after the frustration left and the laughter started I decided to share with you a step by step guide on how to achieve such a bangup morning such as the one I had.

1. Get yourself a vintage alarm clock like the one you had in highschool that way it can wake you up 59 minutes after it is scheduled to go off.

2. Rush the kids to eat and get dressed and ignore that your son is complaining of a stomach ache and just call it a typical “don’t want to go to school excuse”.

3. Purposely drop your keys on the way out to load the children into the car.

4. Jedi mind f**k your garage door opener into not working.

5. Climb onto the bumper of your car with the intention of falling off said bumper while the garage door release handle slowly slips out of your hands (you should really try this, it’s quite fun).

6. Destroy you purse, car interior and pockets looking for the keys you “purposely” left in the house.

7. Call your loving husband who is sleeping oh so comfortably in the bed you wish you were hiding under.

8. Knock/fist pump/punch on the door that locked itself. Maybe throw in a good kick or two and of course a nice scream while you’re at it.

9. When all else fails lay on the horn until a fore mentioned husband stumbles out into the garage with a crazed confused look on his face.

10. Pretend this was all just some sick cosmic joke seeing as your husband had absolutely no issues getting the garage door to open.

There you have it. In ten easy steps, maybe less if you’re in a hurry, you too can achieve this awesomeness of a morning.

What am I going to do with this crazy kid

February 28, 2011
inChildren, Humor
• Leave a comment
My third born has been a constant surprise since day one. My daughter was almost nine months old when I found out I was pregnant with him. To say I was shocked would be putting it lightly but even though it wasn’t a planned pregnancy I was beyond elated to be adding another little bundle of joy to our little family. He continues to keep me on my toes through out my pregnancy. I had some bleeding mid way through and a really bad bladder infection which I couldn’t take meds for and he was a very active little bugger when he wanted to be. He kept on surprising me when I went into labor at 37.5 weeks. I was in complete denial that it was actual labor because I had plans to go out and buy a belly cast since he was my last. I had wanted one with each pregnancy but never went out and bought one so I was determined to do it that time. Well he had other plans. I called my husband and he scrambled to get home since I was doing a home birth. Even my midwife barely made it in time LOL. Three and a half hours of labor and he made his appearance.
At just under a month old he had emergency surgery to fix a stomach problem, pyloric stenosis. He stopped nursing all on his own at a year old. Hated pureed food and went straight for regular food. Started walking at 11 months. Started running not long after he was walking.  Started talking in full sentences before he was two. Climbed out of his crib like a pro at a year and a half. Being a dare devil.
He continues to amaze and scare the crap out of me every day. I have never seen a child with such curiosity or so much personality. I absolutely LOVE it. He is my wild card. In a lot of ways he is like his brother or his sister but he is also very different. It’s so much fun watching him grow and seeing what he will do next.
The other day while I was getting the kids lunch ready he started talking/yelling at me. Now when Shawn talks he has so much personality to him that it just amazes me that a 2.5 year old is actually the one talking. Half the time I can’t help myself from bursting into laughter at what this kid comes up with.
Case and point:
You can hear me laughing and yes I even snorted. That is my wild, full of personality, keeps me on my toes, drives me batty and makes me laugh constantly 2.5 year old little love of mine.