Shawn has always kept me on my toes. From the time he made his early appearance in this world, and he still does today. He has to be watched like a hawk or he is seriously into everything! We have baby gates to keep the kids out of the kitchen but I’m almost to the point of not even bothering to use them anymore because they don’t sure as heck don’t prevent my kids from entering the kitchen. I get that thing as tight as I can possibly get it and they simply knock it over. Even the baby knows how to do it! Perfect example would be this morning. I run to the bathroom and come back to see this: 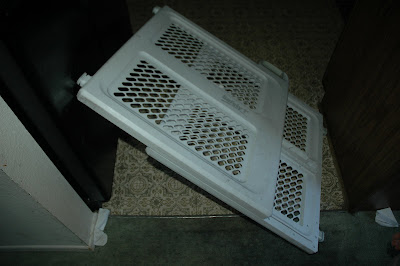 Hmmm, I wonder which kid did this??? 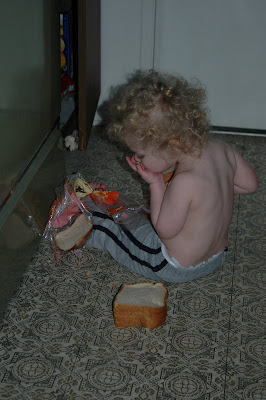 Well there yah go. It was my littlest of buggers, Shawn. 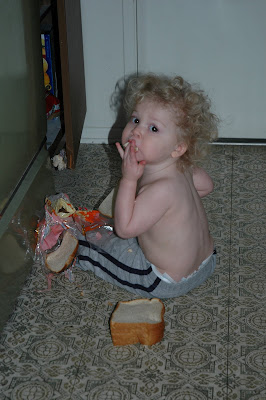 He emptied the whole loaf of bread and very neatly laid it on the floor while he shoved as much as he could in his little mouth. 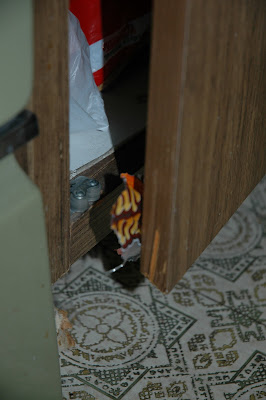 Now here’s my second complaint about these so called child protectors. My pantry door has a child lock on it. Well not so much a lock but one of those tabs you have to push in in order to get the door open. It doesn’t really work so well in my opinion if you can still open in two inches which is just big enough for little hands, say little 1.5 year old and little 3 year old hands to squeeze in there and grab what they want. Today it was the bread and on the way the bag caught on the door and ripped as he pulled it out.
While I did find it funny that he went to such lengths to get a piece of bread, and of course I had to take pictures, it annoys me that we have all these “child safety” products that aren’t worth a damn in this household. As I type this Shawn is working on trying to knock over the gate yet again. I’ll give him one thing, he is a determined little man LOL