A day at the fair

The kids and I went to the fair with a good friend of mine, Jenny yesterday. The fair ends today and since I wont be home I wanted to take the kids one last time since we haven’t really been able to spend a lot of time there.
Last year Jr didn’t want anything to do with the rides. I brought him on the bumpers cars with me and he hated it. I also carried him up the slide (hardest workout ever LOL) and he wasn’t really a fan of that either. So this time when he asked to go on the bumper cars, the slide all by himself and his first roller coaster I was so proud of him! 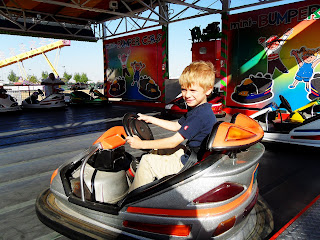 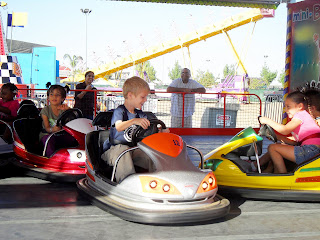 Now I just have to throw in a picture of my little diva. All her little divarisms just come naturally to her, she doesn’t even realize she’s doing them. To me they are just too flippin cute. So when I saw her standing watching Jr on the bumper cars I had to snap a shot of her little pose. 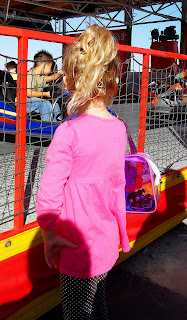 Now, this little obstacle course Jr had his eye on since the first time we came to the fair. While it may seem small and nothing of difficulty for some. Jr is a very timid kind of guy. He will talk about how he wants to go on big rides and do big things but when it comes time to do it he gets scared. Nothing wrong with that. I was the same way growing up. It was really neat to watch him go through the course. I could see on his face that he didn’t really want to do it after he got inside. The little bit of fear but my boy pushed through. I am beyond proud of him. Normally he would have cried and ran out the other side but he just kept on going. He would pause a few times but he didn’t quite. This is a really huge step for him. 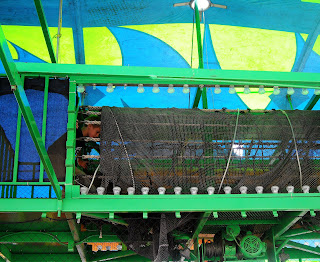 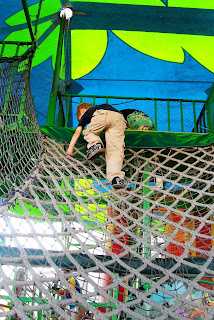 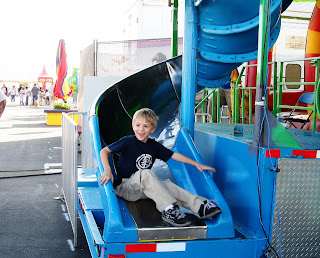 My boy just kept on surprising me yesterday! Next he asked if he could go down the slide. As soon as I handed him his ticket he was off. I didn’t even get a chance to take a picture oh him before he got on. But I did manage to catch these few pictures which just speak to me on so many levels on how much my boy is growing up and maturing. 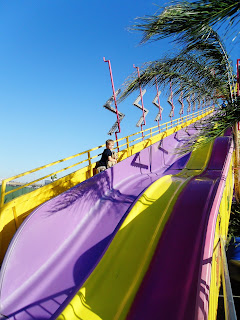 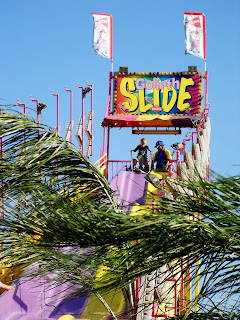 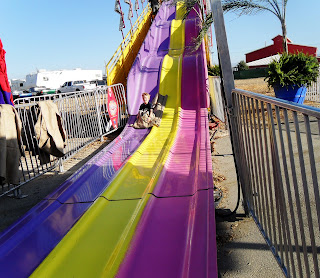 I love how he is smiling back looking at me in the first picture. He was so excited to go on like a big boy without mommy there to hold his hand. And that smile didn’t go away the whole climb up or the way down. And last but not least his first time on a roller coaster. I tried getting Samantha to go on with him but that was a no go. Im bummed that all the pictures I took of him actually riding the coaster came out was a big huge blur. But hey a picture of him sitting on it right before it goes is proof right LOL

And that concludes our day at the fair. It was a lot of fun. OH, and I won two free tickets to Knotts Soak City in a free raffle drawing. I know I am such a dork but I was shaking I was so nervous to go in front of all these random people and claim my prize. But I did it and I can’t wait to go with my family.